Let's just say that last week, I looked at my calendar, spit out my wine and said:

"Oh SHNIZER! I'm getting married in FOUR MONTHS!"
And a flurry of appointments, panic-moments, and frantic organizing began.

And then Easter happened.

And then my phone went kaput.
And then a meteor crashed into my bedroom and turtles started dancing and flowers were somewhere over there and the old spice man was at my door with apples and oranges and...


Well. Enough excuses. Please accept this picture of my cat as an apology: 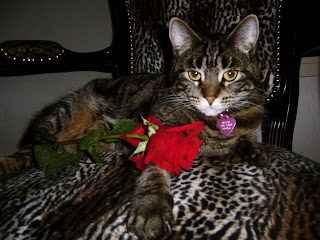 Or stay tuned for a LOAD of upcoming AWESOMENESS, including:

-a post on how to write and perfect your hook (logline/elevator pitch)
-a VERY inspiting guest post by the lovely Agent Laura Bradford
-possibly...the news on when I'm re-opening to submissions...(yes, it has been decided...but not announced...)
Posted by Natalie M. Lakosil at 9:02 PM 17 comments:

Why I'm Scared (to self-publish)

I started this blog post today after pondering the sentiment many people have that “your days are numbered, agent. Why should I get a publisher or pay you 15% anyway when I can just put it up online myself and get a 70% royalty?!”

I wanted to show that no, really, agents are pretty much awesome. I mean, you can just read this and know that right?

Research commenced. I found out exactly how to self-pub:

“With Kindle Direct Publishing (KDP) you can self-publish your books on the Amazon Kindle Store. It's free, fast, and easy. Books self-published through KDP can participate in the 70% royalty program and are available for purchase on Kindle devices and Kindle apps for iPad, iPhone, iPod touch, PC, Mac, Blackberry, and Android-based devices. With KDP, you can self-publish books in English, German, French, Spanish, Portuguese, and Italian and specify pricing in US Dollars and Pounds Sterling.” -Amazon.com

If you want to be available on more than just the Kindle, you'll need to put your book onto a site like Smashwords.

Awesome. Know thy enemy and all that.

Then came the time to throw the wrench into this eeevil plan.

"The Beanie Baby Handbook by Lee and Sue Fox sold three million copies in two years and made #2 on the New York Time Bestseller list." -Groundbreaking.com

The biggest decision you seem to have to make is whether or not to protect your ebook with Digital Rights Management(which, by the way, isn't a clear option you have to do anyway, so it's probably not even something you would think about).

So what can I really say against it?


Nothing. Except that I would never do it.


At the end of the day, self-publishing is incredibly tempting: I have several unpublished manuscripts lying around. I have over 2,000 twitter followers. I’m sure if I priced the sucker at $.99 people would pay to see just what this agent’s got. So why the heck not?

Well. I suppose because there’s no guarantee. Yes, it could be some easy, quick cash; but that’s not the point of publishing, is it? Even Amanda Hocking ended up with a traditional publisher.

Part of it, I think, is because to make it in self-publishing, you have to constantly promote yourself. You become a business, and any business needs full dedication in order to succeed and grow. Sure, if you make enough money you can hire a promotional team, but you will constantly have to keep proving yourself, constantly have to be everywhere.

But most of it? The big, glaring elephant in the room that is why most writers are afraid (yeah, I said it) of self-publishing?

Because that means that you’re saying you’re good enough.


I’ve already spoken to the dangers of self-publishing if you don’t succeed; and honestly, though I love me a Cinderalla story and love me easy cash…I really, really don’t have the time, energy, or confidence, to take this risk.


So while I agree whole-heartedly that self-publishing is very tempting, and can be very lucrative if done well, and if done right, as an agent, it holds about the same pull to me as the million-dollar-jackpot.

Since I had some requests to take gobs of pictures at RT 2011, I thought I might as well combine them with the conference overview!

So here it is: a slightly blurry, slightly biased and ego-centric overview of RT 2011. Enjoy!

Today's post is brought to you by Julie Eshbaugh, fab client and author extraordinaire.

She mentioned to me during a recent conversation that she'd started borrowing digital books from her library, and I couldn't resist asking her to do some experimenting to see just WHAT you can and can't do with these copies.

With all the hooplah over library digital-lending, I wanted to know for myself: is there really just cause to prevent this sort of thing?

Take it away Julie!

I first “borrowed” an audio book through my public library about two weeks ago. I just happened to click on “OverDrive” on the library’s home page, not knowing what it was. I learned that I could install an application called “OverDrive,” on my laptop, and through the “OverDrive Media Console,” which it set up on my desktop, I could download audio books to “borrow” from the library.

I was able to customize my lending period. My choices were seven or fourteen days. I chose fourteen.

The first book I “borrowed” was INCARCERON by Catherine Fisher. I wanted to take out a different book, too, but the other book was not available. Apparently, only a certain number of downloads can be “lent” by the library at a time, and all copies had been “checked out.”

Once the book was downloaded, it existed on my laptop in OverDrive. However, when I selected the book from my library’s website, it stated that I could transfer it to my iPod up to three times.

I transferred it to my iPod via OverDrive. I’ve listened to it exclusively on my iPod, although it was available on my laptop, as well.

After the expiration of my lending period, I got the following warning on the OverDrive Media Console on my laptop:
One or more items in your media library has expired.
-Incarceron Series, Book 1
Under the terms of the license agreement and terms of use, you are required to delete/destroy all copies of expired titles, including those transferred to portable devices and other media. Click “OK” to delete expired title(s) now.
OK____________Cancel

I clicked “Cancel,” then tried to play the expired audio book. It wouldn’t let me, gave me a similar message to the above, and deleted the file.

However, I still had it on my iPod. So I hooked my iPod to my laptop to see if that would delete the book from my iPod.

I downloaded a new book to my OverDrive console. It wouldn’t let me transfer it to a USB drive. I got an error message that the format – WMA Audiobook - was incompatible with the USB.

When I chose “Burn” from the OverDrive Media Console menu, I got an error message: “Unable to burn the selected title because the license prohibits burning to CD.”

However, I WAS able to email part of the book to a friend. (The book is in six parts, each one a huge file. I was able to email one part as a .wma file. I’m sure I could have emailed the other five, as well.)

But wait! When my friend tried to listen to the audio file, he received the following error message: Windows Media Player is unable to play DRM protected media.

So basically, there seem to be plenty of protections in place to be sure that I don’t share it, and I can’t keep it on my laptop. It doesn’t seem to be able to force me to delete it from my iPod, but since I don’t know how to share a file that’s on my iPod with someone else, I guess it won’t be of any value to me once I finish listening to it. I’ll probably just delete it to free up the memory.

I should note that not ALL the books available for audio download from my library can be transferred to an iPod/iPad. Some are only for Windows, some for Mac, some just for non-Apple mp3 players, but I have to say that MOST are available for the iPod/iPad.

So that’s what a few minutes of very non-scientific research unearthed.
Posted by Natalie M. Lakosil at 6:19 PM 10 comments: