‘Twas the week before Christmas, when all through New York
Not a publisher was stirring, not even for work.
The books were shipped out by UPS with great care,
In hopes that gift card shoppers soon would be there.

The authors were settled, auto-responder up in my stead,
While visions of royalty statements danced in their heads.
And editor in her ‘partment, and I with cat in lap,
Had just settled our brains for a short winter’s nap.

When suddenly from Outlook there arose such a PING!
I sprang from the couch to see what it would bring.
Away to the computer I flew like a flash,
Clicked open the email and read it in a dash.

The white on the page of the email screen
Caused my face to glow with quite a sheen.
When, what to my reading eyes should appear,
But a wonderful offer that had me grinning ear to ear.
I called to the author, so lively and quick,
Who knew in a moment that this call was it!
More rapid than eagles I picked up the phone,
And dialed, and shouted until to all editors it was known!

"Now Penguin! Now, Random House! Now, Simon and Schuster!
On, Macmillan! On, Bloomsbury! On, on Little Brown and Harper!
To the top bidder goes! This is no time to crawl!
Now dash away! Run P&Ls! Have meetings one and all!"

As giraffes that meander in the plains by the by
When in chase by a lion, as gazelles do fly
So up to the pub house-top the editors they flew,
With a pitch full of praise, and comp titles too.

And then, in a twinkling, I heard from the phone
The TING! and DING! of my cell’s ring tone.
As I pressed ANSWER and talked,  what to my eyes
Though the interweb more offers in endless supply.

One was for three books and filled author with glee,
Yet for World rights, it was tarnished – North American was key!
A bundle of good sub splits it had flung on inside,
And it looked like a good deal, made with much pride.

The next – oh how it twinkled! Its zeroes so many!
Promising so much to author, its flaws there weren’t any!
Its territory, splits and royalties tied up like a bow,
And an amazing editor and marketing plan in tow.

A third bid was placed, trying to beat out all the rest,
And on and on they came, with each new bid progressed!
But to the author it was clear which offer to choose,
From a publisher whose backlist had been her muse!

The editor was bubbly and giddy, a right jolly old elf,
And I laughed when I called her, in spite of myself!
The SQUEE! that she gave and the words that she said,
Soon gave me to know we had nothing to dread.

We spoke not another word, but went straight to our work,
Drafting the contract and working out every quirk.
And laying the final X on the dotted line,
The author gave her approval, and it was payment time!

The editor sprang to her office, to her team gave a whistle,
And away the check flew to us like a missile.
But I read from my inbox, ‘ere I shut it down for the night,
"Happy Christmas to all, and to all a good-night!"

Mary and I started agenting around the same time. I remember sitting next to her at my very first conference and talking about our sales, how things were going, challenges we were facing as new agents. We’d entered publishing at the start of a crisis, a downslide from the “good ol days” of high advances and easy sales (well, at least that’s how I picture how it was). She had an energy and a passion to make the most of her opportunities that was inspiring, and she said something to me that has stuck with me ever since: If we can make it now [in this economy], we can make it any time.

Since then, Mary has gone on to become an agent extraordinaire, author of one of the most popular children’sindustry sites, and now, author of the upcoming WritingIrresistible Kidlit: The Ultimate Guide to Crafting Fiction for Young Adult and Middle Grade Readers*: 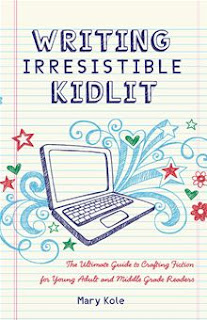 Writing for young adult (YA) and middle grade (MG) audiences isn't just "kid's stuff" anymore--it's kidlit! The YA and MG book markets are healthier and more robust than ever, and that means the competition is fiercer, too. In Writing Irresistible Kidlit, literary agent Mary Kole shares her expertise on writing novels for young adult and middle grade readers and teaches you how to:

I was intrigued by her new book both because she’d personally inspired me with her advice, and also because of how much her advice and knowledge already resonates on her popular website, KidLit.com. Of course, there are a ton of other writing resources out there. So what makes this one so special?


MK: I took the Donald MaassWRITING THE BREAKOUT NOVEL approach and integrated novel excerpts from thirty-four books that I think are some of today's best. So I'm not just talking about voice in an abstract way, I'm showing writers examples of it, and, better yet, how each specific example works and why. Those next few steps are often missing in writing guides that stop at simply being prescriptive. I've also interviewed some published authors and big house editors to round out my own advice, so I hope to bring writers something bigger than just me on my soapbox.


I found it an engaging and interesting read, not just for honing craft but also for its great introduction and summary about the start of the MG and YA boom to set the stage for breaking into the children’s industry as a whole. The book follows the same straight-forward and in-depth style found on Mary’s website with some really fun notebook doodle designs to set the mood. But most importantly, it steps beyond what any one post on a blog or website could answer by tackling some of the toughest questions on voice, revision, authenticity and even career-minded market writing with thorough examples and explanations. I’ve only just scratched the surface of these tricky subjects here on my own blog, and I know that while I was reading there seemed to be a constant mantra in my head of: Yes. Yep. Check. Yep.


And it’s not just a guide for writing; true to the spirit of that same energetic and inspiring agent I sat next to all those years ago, what Mary hopes readers (writers) will take away from this book is more than advice; it’s the urge not to feel stuck by what you’ve got but to take risks and make the most of opportunity to go out there and MAKE IT HAPPEN:


MK: In assigning exercises and covering the bases of the biggest craft issues, I hope to inspire writers to go back to the drawing board, experiment, and play with their work. Too often, we get locked into the words we've written because they're already there and anything is better than a blank page. We lose that sense of creativity. You are making everything up when you write. There's shouldn't be a sense of "it has to be like this" or "I can't do it this way." Of course you can. And sometimes it's that play that we indulge in once we get over ourselves and break our own boundaries that results in the best writing.
So check it out! It’s definitely a resource I recommend.
Posted by Natalie M. Lakosil at 6:00 AM 2 comments: